In February the average house prices rose to £231,068, an increase of 0.7%, the highest on record, more than reversing January’s 0.2% drop, said Nationwide, Britain’s biggest building society. This took the annual growth rate to 6.9% from 6.4%. 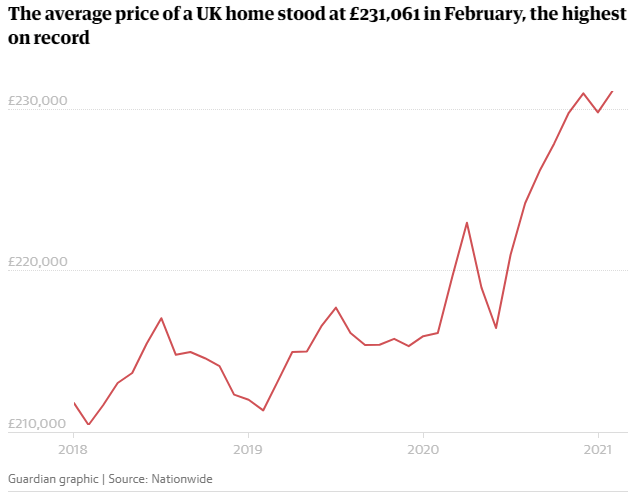 According to Rightmove buyer demand is outstripping supply at the fastest rate in a decade.

The increased number of people looking to purchase property is putting upward pressure on house prices.  The average price of a home coming to market is increasing by 0.8% or £2,484 so far this month.

Enquiries on available properties on Rightmove this month is up 34% on the same period last year which was an active market before lockdown.

This is potentially a good time to sell with sales already agreed for almost 2 out of 3 properties on agents’ books and there are signs more owners are deciding to market their properties encouraged by the recent incentives –  95% LTV mortgage guarantee scheme starting in April and the extension of the Stamp Duty holiday.

Despite the shortage of stock, the number of sales agreed for the first week in March up by 12% on the previous year.

Tim Bannister, Rightmove’s director of property data, commented: “Concerns of a cliff edge for the housing market at the end of March have dissipated, partly due to the tax deadline extensions in all of the UK bar Scotland, but also because the already high level of buyer demand caused by the lockdowns has continued to surge since the start of the year.’’

As more people were forced to work from home during the pandemic, this led to less commuting and changed what people wanted from a property.  Many are moving out of large cities to smaller towns in search of bigger homes that can accommodate home offices and gardens.  The change in working conditions which look set to remain the same as many companies introduce more flexible working and the lifestyle changes this brings are fuelling the activity in the market for homes costing £500,000 and upwards where buyers stand to save the most with the stamp duty extensions.

Savills have revised its UK house price forecast for 2021 to a growth of 4% from their previous prediction that property values would remain flat.

By the end of 2025 it is predicted house prices will rise by 21.1% taking the average house price in the UK to £279,644.  The greatest increase is reported to be in the north-west and Yorkshire and Humberside.

Savills predict a property price growth of 28.8% in the north-west and 28.2% in Yorkshire and Humberside.

Regions outside of London are proving popular with buyers and Savills believe the key reason for the higher prices in other parts of the country was that there was more capacity for growth.