Tenants are forking out a record amount of rent, exacerbating the cost of living crisis for them, according to new data.

They paid out a total of £31billion in rent during the first half of this year, and are on track to pay out £63billion for the year as a whole.

The figures from lettings agent Hamptons show that rising rents mean the total amount of rent paid by tenants has more than doubled since 2008. 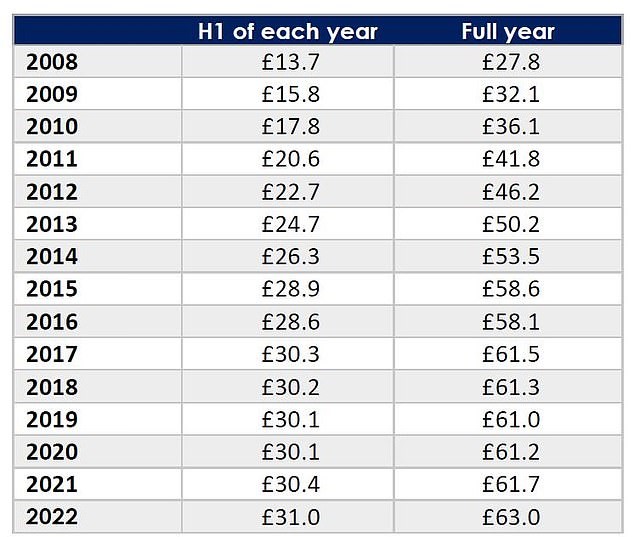 The total estimated rental bill has surpassed the 2017 peak, despite there being around 275,000 fewer private tenants than there were five years ago.

Hamptons looked at rental costs across generations and said rising bills were hitting Generation Z hard – those born between 1997 and 2012 – as its members are flying the nest.

Generation Z paid a record £5.8billion in rent during the first half of this year, a figure likely to hit £11.7billion over the whole year.
It means that, for the first time, they will pay more rent than Baby Boomers, defined as those born between 1946 and 1964.

Aneisha Beveridge, of Hamptons, said: ‘As Generation Z fly the nest, they’ve seen a tenfold rise in what they pay in rent over the last three years meaning they now hand over a fifth of all rent paid.

‘Generation Z are joining the rental market faster than any previous generation, mostly because fewer are likely to become young homeowners.’

Generation Z’s rent bill is rising at a faster pace than when the previous generation started to leave home during the 2008 downturn. That generation was Millennials, who were born between 1981 and 1996.

On Generation Z’s current trajectory, they are likely to be paying more than Millennials within the next three years.

All other generations have spent less on rent than last year.

Millennials, who make up the current largest generation of tenants, paid £2.4billion or 18 per cent less in rent during the first half of this year than during the same period a year ago.

The Millennial rent bill has fallen by nearly half – at 49 per cent – from 2017 as many tenants between their mid-20s and early 40s bought their first home.

For more information about our property investment opportunities, please get in touch.

With HS2, a rental boom and family-friendly suburbs, the Commonwealth Games host city is going for gold. This is Birmingham’s time to shine,” Boris…
5 min
Read More