During the last seven decades, the cost of a home has changed dramatically. The property market was very different back in 1952, with just 32% of households owning their own home, compared to 65% today, according to Nationwide.

As well as the Queen’s Jubilee, it has also been 70 years since the building society produced their first house price data.
The average house price in the UK back in 1952 when the Queen was crowned was £1,891 – which is around £62,000 in today’s money which was around four times the average earnings. Today, the average property costs £269,914, according to Nationwide’s latest figures, around 6.9 times average earnings – a record high.

However, Nationwide say borrowing costs were a lot higher back then, with the bank rate at 4.0% compared to 1.0% currently.

In the early 1950s, almost all mortgages were advanced by building societies, where the majority were small, locally-based lenders. In 1952, there were 800 societies operating in the UK, compared to 43 today.

In the 70 years following, house prices have fluctuated massively. Nationwide data shows that there was a steady increase in house prices up until the 1970s before the price of a home shot up towards £150,000 around 1972. 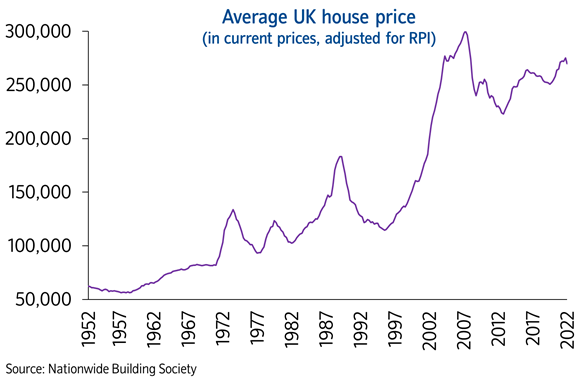 The Queen’s Silver Jubilee in the 1970s saw mortgages become more widely available to more buyers, however high inflation had a negative impact on the repayments, making them unaffordable for many, says online lettings agent Mashroom.

By the 1980s, buying a home became an aspiration for many and saw the introduction of the ‘Right to Buy’ scheme, allowing people the opportunity to buy their rented council houses.

However, by the late 80s, a pending recession and house market crash made it less likely to obtain a mortgage and repayments suddenly became less affordable for the average household.

It was around the time of the recession in 2008 when house prices reached a new high of £300,000. In the last two decades, the cost of a home has shifted up and down but still remains high today.

According to Nationwide’s latest data, house prices have seen their tenth successive monthly increase in May which has kept the annual price growth in double-digits.

The average house price which currently stands at £269,914 slowed modestly in May, with an annual growth of 11.2 per cent in comparison to 12.1 per cent in April.

However, prices have still gone up 0.9% month on month after taking into account the seasonal effects of the market.

Commenting on the figures, Robert Gardner, Nationwide’s Chief Economist, said: “Despite growing headwinds from the squeeze on household budgets due to high inflation and a steady increase in borrowing costs, the housing market has retained a surprising amount of momentum.