With HS2, a rental boom and family-friendly suburbs, the Commonwealth Games host city is going for gold.

This is Birmingham’s time to shine,” Boris Johnson declared as the West Midlands city prepared to welcome officials and the 6,500 athletes of 72 teams from across the world to compete in the biggest sporting programme in Commonwealth Games history.

The Games, which opened last night, are a fitting tribute to a city that has been quietly shedding its image as a traffic-choked industrial behemoth. With its wealth of start-ups and big businesses (including PwC, Goldman Sachs and HSBC) that have opened offices, its booming economy (worth £31.9 billion — the biggest outside of London), the more than 200 shops in the Bullring & Grand Central shopping centre, and the forthcoming Curzon Street HS2 station, the UK’s second city has a lot to shout about.

Birmingham is the birthplace of the balti curry and home of the UK’s oldest working cinema, and has more miles of canals than Venice. When the superfast HS2 railway line opens — phase one of the project (London to Birmingham) should be completed by 2033 — journey times to London will be slashed to 52 minutes.

“Birmingham and its city centre have changed dramatically over the past ten years — never more so than in the past three or four, when even a global pandemic did little to halt the speed of its evolution,” Ben Evans, a partner for the estate agency Mr and Mrs Clarke, says. “Three distinct areas that have changed the most are the City Core, Eastside/Digbeth and Edgbaston/Harborne.”

Here is our lowdown of the best places in Brum:

Birmingham has one of the youngest populations in Europe — there are 80,000 students dotted across the city’s five universities. The University of Birmingham, a Russell Group institution, is ranked 25th in the country in The Sunday Times Good University Guide 2022. The university’s two campuses are home to the grade I listed Barber Institute — a concert hall and gallery with one of the UK’s best small art collections — seven acres of leafiness at Winterbourne House and Garden, and top-class sports facilities that will hold the Commonwealth Games hockey and squash events. Impressively, 49 per cent of University of Birmingham graduates choose to stay and work in the city.

In the city centre (where the average house price is £214,784, according to Rightmove) and the Jewellery Quarter to the northwest, warehouse conversions join a swathe of new-builds. “Paradise, once a dated concrete block inside a traffic-laden gyratory, is undergoing a full transformation,” Evans says. The £700 million Paradise redevelopment (between Chamberlain and Centenary squares) includes the 49-floor Octagon, a build-to-rent block that will become Birmingham’s tallest building on completion in 2025.

“The old, brutalist Central Library has gone, and now grand old buildings and cutting-edge new commercial and leisure spaces sit side by side,”

Cool and polished, the Jewellery Quarter (average price £214,154, according to Rightmove) is a favourite residential neighbourhood that still churns out 40 per cent of all jewellery made in the UK. The former workshops and warehouses in the streets surrounding St Paul’s Square house art galleries and 80 cafés and restaurants. For casual grazing head to Hockley Social Club, a food hall, bar and events space in a former 10,000 sq ft printing factory.

You’ll find the most expensive apartments in the city in the Jewellery Quarter.

Birmingham offers city living at a snip of the price of London — average prices are just over £250,000, compared with almost £700,000 in the capital, according to Savills. For fun, edgy vibes within a 15-minute walk of the city centre, look no further than Digbeth (average price £184,813) in the Creative Quarter. While rough around the edges — it has been “up and coming” for two decades — illegal raves have been replaced by vintage clothing pop-ups, live music venues and all the entertainment options you could hope for, in and around the restored Bird’s Custard factory.

Neighbouring Eastside, also known as the Knowledge Quarter, is home to Aston University, Birmingham City University and the site of the Curzon Street station.

Southside, encompassing the Chinese and Gay Quarters to the south of the City Core, is a hub for nightlife, and is the location of Birmingham Hippodrome, for ballet, musicals, opera and comedy.

Chichi Edgbaston (average house price £331,151), curved around the southwest of the city centre — the birthplace of lawn tennis and the former prime minister Neville Chamberlain — is an affluent suburb known for its multimillion pound Georgian and Victorian villas. King Edward’s School is rated 33rd best in the country by The Sunday Times Parent Power shools guide (fees £4,885 a term); Edgbaston High School for Girls is ranked 204th. 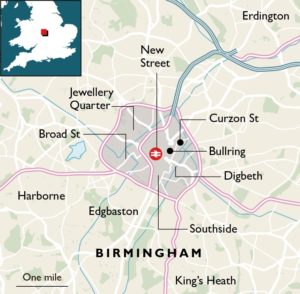 “Edgbaston once lacked a proper beating heart, but this has now emerged thanks to significant investment into leisure and retail facilities in Edgbaston Village,” Evans says. Many of the prized properties in the desirable B15 postcode fall within the Calthorpe Estate Conservation Area.

The selective secondary King Edward VI Camp Hill School for Boys, in Kings Heath, is ranked 10th best by Parent Power. To the north of the city, Erdington has good schools, and the leafy suburb of Boldmere in Sutton Coldfield (£315,545) has excellent transport links (just over 90 minutes to London via Lichfield) and acres of green space on its doorstep. Sutton Park is one of the largest urban parks in Europe. 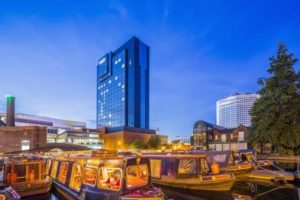 Birmingham is an upcoming build-to-rent hotspot: 1,900 homes have been completed, and 9,400 are under construction. In 2021 a transaction total of £670 million made Birmingham the most popular city outside the capital for investment.

William Cox, a director at the estate agency JLL Birmingham, says: “While the city continues to experience an undersupply of new rental housing, 2021 was an encouraging year for investment and development, so it’s key that we continue in this vein to support the city in achieving its full potential.”

Birmingham is the city where JLL expects to see the highest house price growth in the UK over the next five years. Property values are forecast to rise by 27 per cent, and rental growth is expected to reach 17 per cent over the same period. Birmingham’s house prices stand at £222,834, versus the UK average of £289,099. Estate agency Barrows and Forrester estimates that the Commonwealth Games will boost house prices by just under 15 per cent, which would lead to property values climbing to £255,934 by this time next year. A legacy of the games will be 5,000 new homes built by 2040.

For more information about our property investment opportunities please get in touch.

Tenants are forking out a record amount of rent, exacerbating the cost of living crisis for them, according to new data. They paid out…
2 min
Read More