Work on an ambitious film studios plan linked to Netflix, Amazon and HBO is set to start next year after the scheme received a £14.7 million boost in the budget.

It was announced earlier in the month that the proposed transformation of Ashford’s derelict Newtown railway works into 7,440 sq m of filming and production space will receive the cash from the government’s Levelling Up Fund. 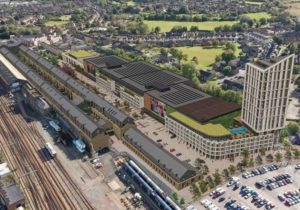 The £4.8 billion fund will, the government says, support the town centre and high street regeneration, local transport projects, and cultural and heritage assets.

Ashford Borough Council (ABC) submitted a bid for cash in June and was supported by the town’s MP Damian Green.

Bosses now hope to start work on the ‘Ashford International Studios’ project in 2022, with the studios opening within two years of construction starting.

Mr Green said: “It’s good news for the project because first of all the money is useful, and second it shows that it has central government’s support. 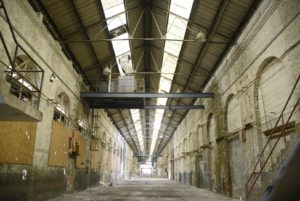 “The project itself is really important for Ashford’s future.

“Those works, which are magnificent buildings, have been derelict for decades and using that land constructively is a big step forward for the town.

“But even more important is the prospect for job creation, not just the studios themselves, but a lot of the surrounding support industries because there will also be a hotel there, for example.”

Plans for the site, which has been vacant since the mid-1980s, have been identified by ABC as one of the borough’s strategically important projects.

Mr Green added: “There’s also the education point. Ashford College has plans to set up a campus there working for many of the skills needed in the creative industries. 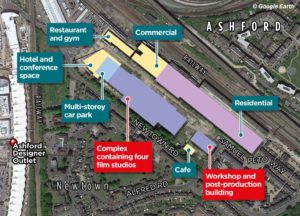 “People will have a new set of industries on their doorstep that we have not had in Ashford before, and a means of training to take advantage of them.

“All together it’s a vitally important project for the town and I’m delighted the levelling up fund is supporting it.

“The bid came in jointly from the council and EKC Group and everyone involved got working on producing a detailed plan.”

As part of the scheme, Quinn Estates will redevelop the Grade II-listed locomotive sheds for mixed commercial and residential use, as well as including workshops and 300 flats with space for a new Kent Film School.

A rooftop restaurant and a 383-space multi-storey car park will be included, with an 18-storey hotel also planned. 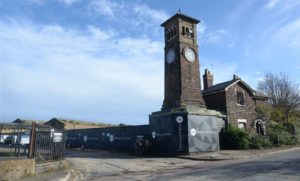 The historic clock tower close to the Newtown railway bridge – opposite the former Klondyke Works – will be retained.

“The funding is for investing in infrastructure that improves everyday life across the UK, including regenerating town centres and investing in cultural and heritage assets.

“This decision has the potential to make lasting improvements to the Ashford economy and a community asset with circa 2,000 new jobs at the heart.” 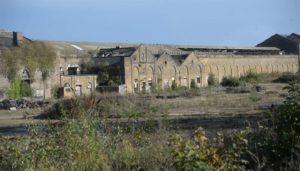 Bosses are yet to confirm which company will take on the studios, but Netflix, Amazon and HBO have all been linked to the project.

On the education side, Graham Razey, chief executive officer for EKC Group, which runs Ashford College, said: “The news that this would receive funding was certainly cause for celebration, as it’s a truly exciting project for the whole of the Ashford borough.

“We’re exploring the various curriculum opportunities we could deliver within the development, as part of a real marriage between industry and education, ensuring the community we serve gets the skills they need.

“This funding will help this new project take another step forward.”

ABC leader Cllr Gerry Clarkson (Con) added: “This strategic project will deliver a key economic driver for Ashford and Kent, much needed inward investment for the UK and will regenerate a nationally important railway heritage site.”

Last summer, preparatory works started on the site, with diggers moving onto the 12-acre spot.

For more information about our property investment opportunities in Ashford, please get in touch.