UK house prices have hit record levels across every region of Great Britain, according to the latest figures, although some experts have questioned whether the pandemic boom is finally starting to wane.

The price of property coming to the market has risen by 0.8% (+£2,509) this month, pushing the national average to a new record high (£336,073) for the third consecutive month, according to data from Rightmove.

This is a much smaller rise than last month’s 1.8% or April’s 2.1%, which alongside analysis of the activity of millions of home-movers on Rightmove, indicates an early sign of a slowing in the pace of the current hectic market. However, it is still the largest rise at this time of year since 2015, buoyed by the strength of both the top end of the market and hotspot lifestyle change locations. This has resulted in new record highs for prices in all regions of Britain, further stretching affordability for mass-market buyers whose ability to move is also affected by an unprecedented lack of choice of property to buy.

Economists and housing insiders have been surprised – and in some cases taken aback – by the strength of the UK house price boom during the Covid crisis. Andy Haldane, the Bank of England’s chief economist, said this month that Britain’s housing market was “on fire” because of the government’s stamp duty tax breaks as well as increased demand from richer households with more savings after lockdowns. There has also been demand for more space since the coronavirus struck, raising prices in some areas still further. 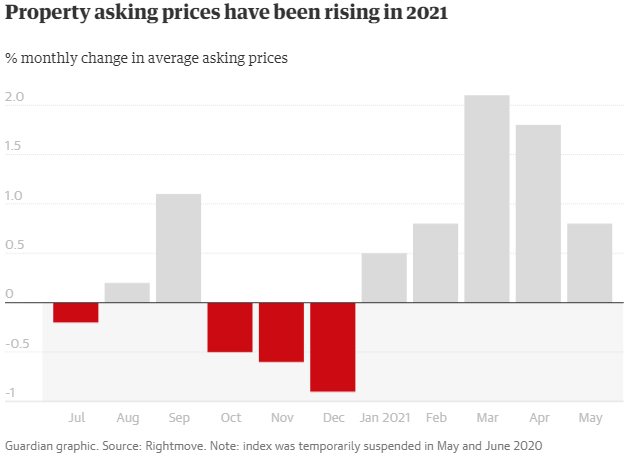 Tim Bannister, Rightmove’s Director of Property Data, said there were “early signs of a slowing in the frenetic pace” of house sales – although this was partly down to high prices coupled with the number of houses on sale hitting an all-time low.

‘’Since the market re-opened last May in England we have seen huge jumps in the numbers of sales being agreed, but these are now rising at a slower pace. Record low-interest rates and stamp duty tax reliefs have helped many to afford higher prices, satisfying their pent-up desires for a new home fit for a new era. Some of that demand has now been met, and the phasing out of stamp duty reliefs has also taken away some of the urgency to move, though our high traffic and search data indicate that there is still strong buyer demand. However, higher prices combined with a lack of fresh choice coming to market are reducing some buyers’ ability or desire to move, and while we expect the market to remain robust, there are early signs of a slackening in the incredible pace of activity that we’ve seen over the last year. This super-charged activity cannot go on forever, but we expect the market to remain vigorous for at least the remainder of the year.”

Buyer demand continues to outstrip supply, and the market’s size is constrained until supply picks up again. The number of sales agreed by estate agents in May was 17% ahead of the comparable period of 2019, a slackening of the pace recorded in April when sales agreed were 45% higher than in April 2019 (2019 is the best comparison year since the market was effectively suspended until mid-May 2020).

The average number of properties available for sale per estate agency branch is at an all-time low of just 17, falling even further from the record low of 19 in the previous month. This chronic shortage of choice of property to buy means that the number of sales agreed is bound to diminish unless that supply is replaced. 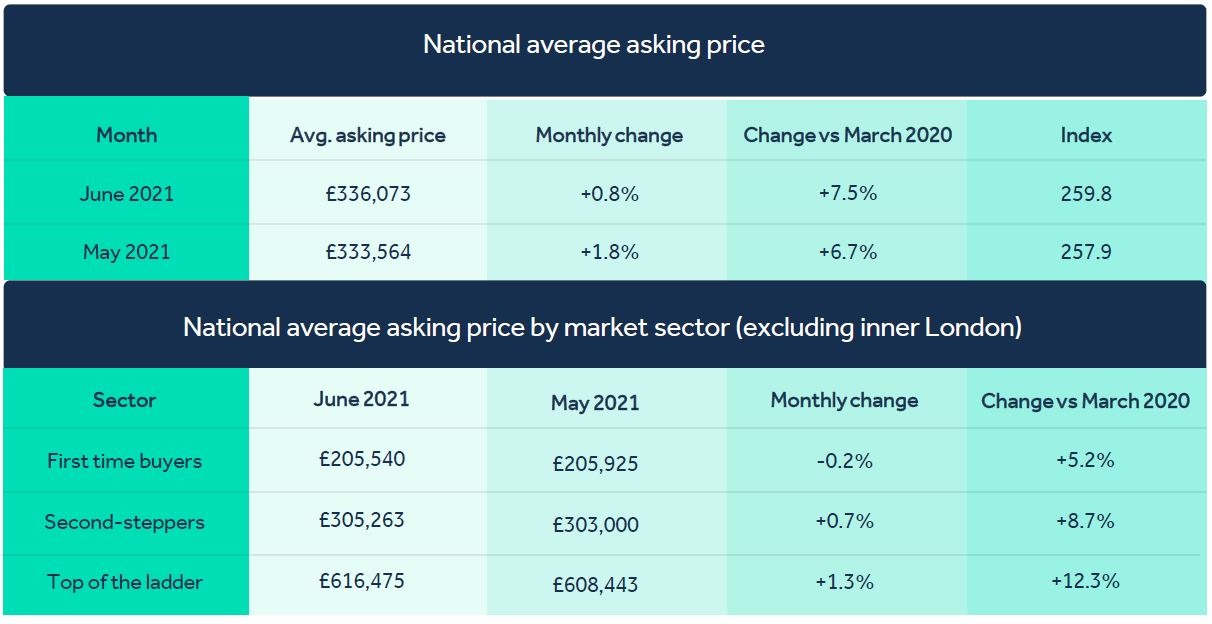 The Rightmove data is based on asking prices of houses on its platform. Separate data from the Office for National Statistics based on completed purchases shows lower average house prices but gives a similar picture of a hot market.

The outlook for house prices has been affected by the extension to the end of the stamp duty holiday. The holiday, brought in by the chancellor, Rishi Sunak, when it appeared that the pandemic might cause prices to crash, has been criticised for fuelling the house price boom as buyers have rushed purchases through to get in before the deadline.

There is an added worry that rushing to beat the stamp duty holiday deadline could lead to issues with anti-money laundering checks.

“In a busy market as we have today, which is driven by the rush to beat the stamp duty holiday, it’s a sad fact that criminals and their enabling agents, will look to exploit the opportunity.”